Look around and get to know Paolo's music universe by reading, watching and listening. Get updated by following on social media and don't hesitate to contact us for any questions.

If you are interested in buying any of Paolo's music please go to the album overview below. You can also go directly to Bandcamp, iTunes or contact us by email: info@paolorusso.com.

To support Paolo's continuous musical work, you also have the possiblity to donate directly via PayPal or in Denmark via MobilePay. 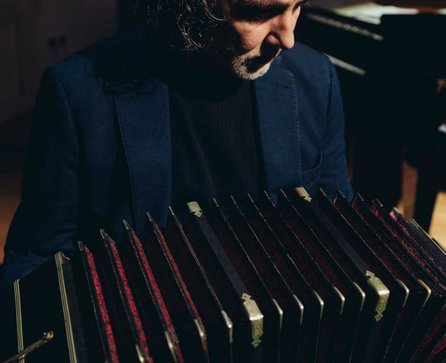 Paolo started out as a piano player, taking diplomas in classical piano in Italy and later in Denmark. However, in 2000 he heard the bandoneon for the first time and was immediately captured by its unique sound and presence.

Over the last 18 years he has worked in depth, studying, composing and developing new music for the bandoneon. With his now three releases on bandoneon solo he has established himself as a bandoneon player with his groundbreaking work, that shows a new and fresh way of playing the instrument.

On his YouTube channel you can follow Paolo's work. He regularly releases new videos - both jazz standards, classical music and original tunes.

For the "Bandoneon solo VOL II - originals" album, Paolo composed brand new music, and this material is also released as sheet music in the anthology. Here from the introduction, in his own words:

"My hope is that this anthology will work as motivation and challenge for all those who want to play the bandoneon in a different way, in order to expand their instrumental horizon, increase their personal repertoire and start a journey towards new musical perspectives."

The anthology can be purchased here through Bandcamp or by contacting us directly: info@paolorusso.com

The great Argentinian master, Néstor Marconi, one of the most prominent bandoneon authorities in the world (and Paolo's teacher) wrote a wonderful and praising preface of Paolo's anthology of Bandoneon Solo Vol. II:

"The musical proposal offered by Paolo Russo deserves consideration for its powerful melodic content, harmony and counterpoint: the bars are marked with constant change and solid groundbreaking ideas prove that this work is not only a valuable innovative contribution, but also a challenge for any professional bandoneon player, because of its technical difficulties. Thank you, Paolo Russo, for your commitment and passionate love for the bandoneon you give us in all your deeds."

Stream the full bandoneon solo Vol II album here directly from Bandcamp. Here you can also purchase the Anthology with the sheet music for all compositions.

Watch the song "Nobil Son e Fatal" from the new album, recorded live at a concert on the last day of recording at The Odradek Records studio in Italy.

The piece was composed in 2016 for the unique combinations of instruments: Recorder, vibraphone, contrabass and bandoneon. Listen to a medley in this short presentation video:

A selection of photos from Paolo's different project and press photos. Please contact us for pictures in bigger formats or special requests info@paolorusso.com

Click an album cover below to purchase any of Paolo's albums. We recommend that you enjoy his music from his YouTube channel or stream and purchase from Bandcamp directly.

You also have to possibility to donate to Paolo's continuous work in music. Click here to donate

If you are in doubt or have any questions don't hesitate to contact us info@paolorusso.com.

Paolo's fourth solo bandoneon album. 12 classics from "The great American songbook". All re-arranged and re-interpreted by Paolo for bandoneon. (2022)

An album with music for meditation, inspired by the Archangels, the four cardinal points, the four basic elements and the Divine Feminine. Commisioned by “De Ni Porte” (“The Nine Portals”), Institute for Spirituality in Copenhagen, Denmark (2022).

Paolo's 17th album with 17 newly composed and improvised pieces - all written and played by Paolo. Playful, deep and intimate. (2020)

In Imaginary Soundtrack, Paolo Russo and friends invite you to create your own narrative to accompany their vivid, suggestive soundworld. (2019)

Paolo Russo Jazz Trio - all music and arrangements by Paolo Russo. An energetic and joyful album that reflects the outer and inner journey with beautiful melodies and virtuos playing (2019).

The second bandoneon solo album. All original compositions including an Anthology with the sheet music of all compositions (2017).

An instrumental work in 11 episodes, composed and arranged by Paolo Russo, for the international Ensemble Midtvest (2017).

An album featuring Duo Russo & Vilensky, encompasing the elegance of the cello, with the passion of the bandoneon (2016).

The first album in the series of bandoneon solo albums. The album contains a collection of classic jazz standards arranged and played by Paolo (2015).

A live recording of the concert "Fellini Goes Jazz" - a tribute to Italian cinema and the music of Nino Rota (2014).

With Thommy Andersson on bass and Josefine Cronholm on vocal. A challenging musical encounter between the Nordic spirit and the Italian soul (2013).

Recorded in 2004 in Copenhagen. Original music with a group of international musicians (2004).